The colour’s coming back in

Like post-war technicolour movies, colour has come back to the landscape, despite a winter which wouldn’t let go.

In another throwback to the 1950s, the 2018 Doomsday Clock is now at two minutes to midnight, where it last was in 1953 during the height of the Cold War. This is the closest it’s been to midnight, and for me it’s a wake up call to live in the moment as much as I can. Not to escape from my responsibility as a citizen to work for peace and justice, but as a way to recharge.

There’s a long tradition of engaged people and activists taking medicine from nature, and it looks like we’re going to need this resilience more than ever this year. Noticing nature all around us is one of the best ways to do this, even in the city.

Spring comes early in urban environments, and not just because of the warmer micro-climate. Our street, garden and park trees provide some of the first good blasts of colour: cherries, magnolias and camelias.

There’s a cherry tree near where I live which is positioned right next to a street lamp, and before the clocks went forward I would always walk past it in darkness on my way home from work. It was like walking under an incandescent wedding gown.

But I love the strange Magnolias (the most common garden sub species is Magnolia grandiflora) the best. When I used to teach kids I would describe them as ‘dinosaur trees’ because the genus is so ancient. A bare tree with huge flowers does look kind of weird, if you stop to think about it, and the Magnolia genus appeared on the planet so early it was before bees had arrived and the flowers evolved to encourage beetles to pollinate them, instead. 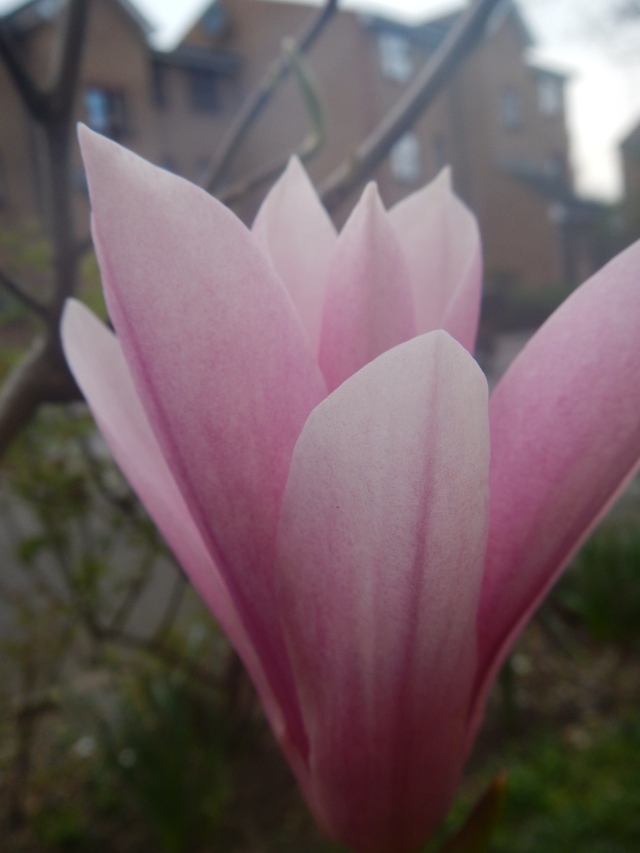 Fossilised specimens from the Magnoliaceae family have been found dating back to 95 million years ago, so this is a plant that can blow your mind as well as look pretty and weird simultaneously.

You can stroke it, too: before the flowers unfurl, they are held together by velvet bracts which look and feel like furry velvet purses. (The kids loved doing that, but why let them have all the fun?) Once opened, the petals feel and look different to many other flowers; pink fleshy tongues which feel stiff to the touch, like they’ve been ironed. The carpels at the base of the flower are tough, and they probably evolved this way to avoid damage from the pollinating beetles. 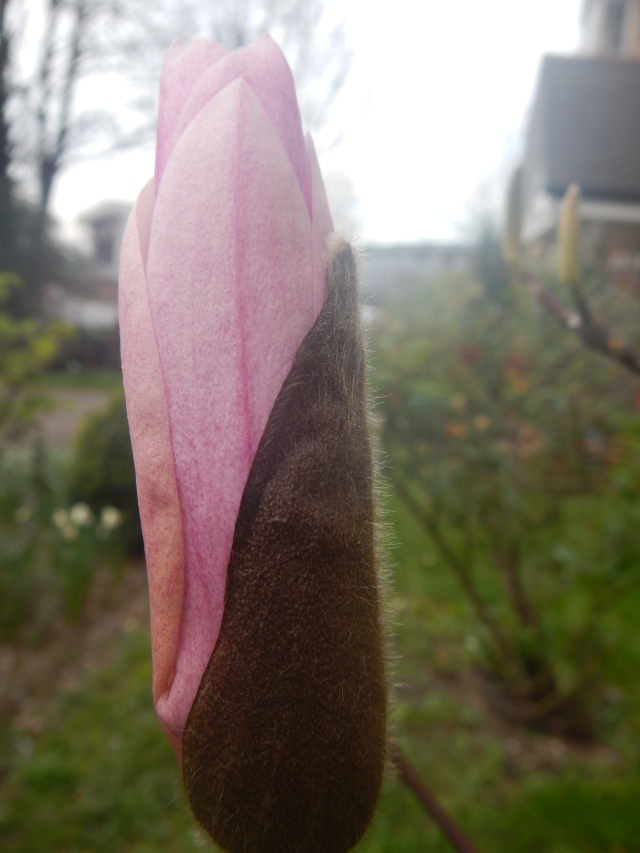 What’s more, you can eat the petals  – though they’re peppery and pungent and too strong for some people. I can still remember walking through the glorious Golders Green Park on the western side of Hampstead Heath and popping a spicy petal in my mouth, guided by Kym of Handmadeapothecary.co.uk. This is a generous plant for sensory satisfaction.

And once we’ve recharged our well-being batteries, let’s all keep doing our best to move that Doomsday clock further away from midnight.

1 Response to The colour’s coming back in